In the Front Yard

I think I have mentioned before that we have Meadow Mushrooms growing in our front yard.  Our neighbor told us years ago that they were safe to eat but we did not try them for a couple of years. 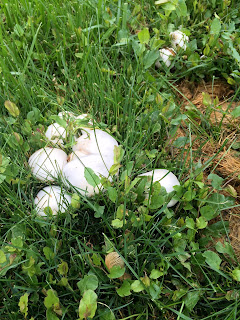 Then, I saw some for sale at the Farmer’s Market so we decided to give them a try. 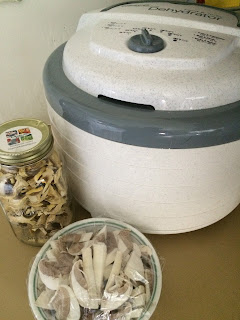 It has been raining a lot this spring so we keep getting flushes of mushrooms!  I have already dried 3 quarts full and I filled the dehydrator with more today and there are still a bunch in the yard!  If anyone wants some, please, stop by and grab some.  We have had our limit. 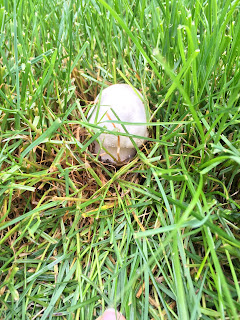 I found some great information about identifying Meadow Mushrooms from a blog called The Thing that is Steve:
Agaricus campestris, the Meadow Mushroom, is one of my absolute favorite fungi. One of the closest relatives to Agaricus bisporus (the common Button Mushroom, found in grocery stores all over the world), it is the brother who seems to have inherited twice the flavor. After heavy rains, we always pull in pounds of campestris and preserve them with our food dehydrator.

When identifying Agaricus campestris in the field look for:

This might seem silly but I keep thinking about next year and how we will be moving.  Not sure if we will be getting any mushrooms…(sad face)…
This morning, I listened to SowEdible podcast and they were talking about the benefits of mushrooms growing in your garden.  Basically, mycorrhizal fungi (mykes, meaning fungus, and rhiza, meaning root) are  fungi that have developed a symbiotic (mutually beneficial) relationship with the root systems of living plants, from garden vegetables all the way up to the trees. Networks of mycorrhizal filaments envelop the seedling’s root structure, supporting the plant’s own ability to utilize water and nutrients in the soil. This relationship encourages healthy, vigorous growth.
On the podcast, they mentioned that they were going to start some mushrooms in a wood pile and then apply the wood pile chips to their garden, in hopes of getting the mycorrhizal benefits for their garden.  I found this “outdoor growing mushroom kit” Garden Giant Mushroom Patch and hope to use it for our new garden in a couple years! 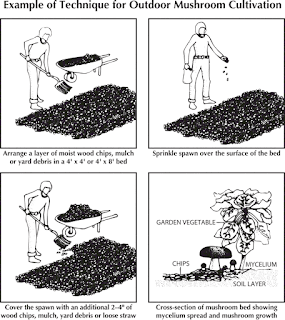