In September, I went to our local beekeeping club meeting.  We had a speaker talk about Varroa mites and how terrible they are for your bees.  I know that varroa mites are bad news but my hive was growing so strong that I had not really been checking for mites.
So, after hearing the speaker, I was concerned so I went to my hive and pulled out the bottom white board.  See, the bottom of my hive has a screen and then here is a white bottom board under that.  I can pull out that white bottom board and see what has fallen through the screen.
I did see some mites but I was not worried because it’s pretty much impossible to have a hive and absolutely no varroa mites.  I cleaned off the bottom board and put it back.  Then, I went out the next week and pulled it out and there were a LOT more mites.  I ordered some miticide…
Here is a quick video about the varroa mite and their life cycle.  Yes, this is an advertisement for the miticide and this is the one that I bought and used…
In a perfect world, I didn’t want to have to use any treatments on the bees.  However, we have also invested close to $1000 in these bees and so I really want them to make it through the winter!
There are definitely less bees in the hive.  In the fall, the hive will get smaller.  The drones are often kicked out of the hive because they are not really needed.  Because there are less bees, you can see the honeycombs better. 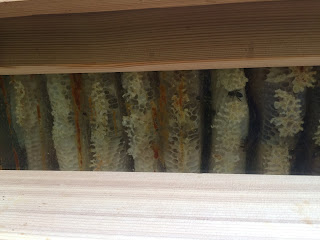 The brood nest is to the right of these honeycombs.  My understanding is that the brood nest will slowly start moving to the left as they are consuming the honey over the winter…time will tell!!!