The good news…the bees are doing great!  The bad news…Mark’s allergies are just terrible.  It appears the honey remedy did not work.  In Mark’s defense, this has been one of the worst allergy seasons in recent history.  My friend is writing a newspaper article about the allergy season.  I will try to make sure to link it once it is published.  I took Mark to the doctor and we are going to see an allergist to start getting the shots.  It won’t help for this year but will help in the future.

Don’t really have much of an update here.  It has been such a cool spring that I could not start planting until May and things are just starting to come up.  I have already planted 3 times and I will plant 2 more times in the next 3 weeks.  I don’t expect to be going to the Farmer’s Market until late July…
It is a little hard to see but I found this guy sleeping when I was planting the first time… 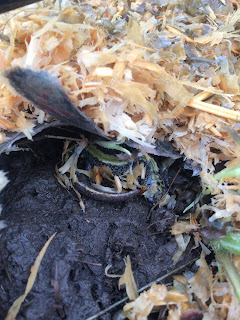 We have been working to purchase a property since last fall…it has been an interesting situation.  We are going to move to the property on June 23rd and rent it until our closing on July 15th.  I have a VERY lengthy blog post written all about it and I will post it once we sign on the last dotted line!