A few weeks ago, I took some pictures of some odd looking cells I found in the bee comb.  See the ones that look like an upside down cup? 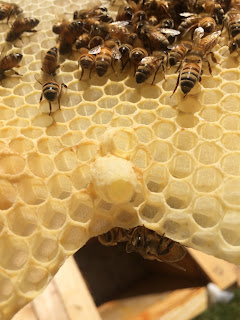 I didn’t really have time to follow up on these odd looking cells.  I have since learned that they are called supersedure cells.  Hives produce them when they need to raise a new queen.  I placed the package and queen in the hive on May 4 and I took these pictures on June 4.  For some reason, my original queen died (I am guessing.).
On June 4th, I checked the hive and found these supersedure cells but I didn’t really understand what they were and so I just left them.
One week later, I check the hive again and I am noticing that I could not find many eggs and there is VERY little brood.
One week later, ( now June 18), I cannot find ANY eggs or brood.  I am starting to freak and realize that my queen is gone!  I start calling at least a half dozen places to try and find a new queen.  Honey bees only live about 5 weeks so as long as I can get a queen in there right away, I can maybe save the hive.
Finally locate a place that will have a queen available the next week (week of June 25).  Things are hot in California so the queens will not be shipped during excessive heat.  I am super nervous because I realize that my bees are probably already about 3 weeks old…since I first noticed that there were not many eggs/brood…
I got a queen from Tate’s Honey Farm.  Click to learn more about Tate’s: 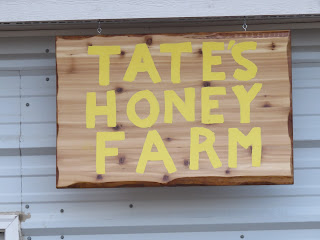 I received the queen in her queen cage with 3 nurse bees the mail!  I took her out to the hive and opened it up and placed her on a new bar.  You have to leave the queen in her queen cage for 3 days before releasing her into the hive so that the bees have a chance to accept her.  I decided that I should take a quick look in the hive.  Much to my surprise, there was brood!!!  I could not believe it!  So, I grabbed the “mail order” queen back out.  It appears that my hive knew that their original queen was weak or had died and they made the supersedure cells and then made their own new queen!  The weeks when I could not see any eggs/brood was the days when she was growing.  Then, she went out on a mating flight and came back and started laying eggs.
Side note:
Once, I realized that my queen might be gone, I started looking for a swarm cell that hangs off the bottom of the comb that might have a new queen, but, of course, I did not find any of these because the hive was not getting ready to swarm, they needed to make a new queen for themselves.
I was not familiar with the supersedure cells (the ones above that look more like cups in the middle of the comb).  I found this information that explains the difference:
Beekeeping nomenclature can be vague and confusing, because there is no one beekeeping terminology authority, here is a description of supersedure cells from beekeeper, Rusty, of HoneyBeeSuite.com :
A cell hanging off the middle of the frame somewhere is usually a supersedure or “emergency” queen cell. A cell hanging off the bottom of a frame is usually a swarm cell.
Supersedure cells are often begun after the eggs are laid. The bees, knowing they need to replace the queen, begin feeding royal jelly to a young larva they have selected. They build a supersedure cell around this larva (or several larvae) and it hangs down from the face of the comb. Swarm cells, however, are built in preparation for swarming and are not intended to replace the queen, but to raise a second queen. This way, there will be a queen for the part that swarms and a queen for the part that stays.
I gave the mail order queen to our 4-H leader that may be splitting a hive and needed a queen.  I am just so happy that nature took over and now I have a queen that has been locally mated!  Maybe the offspring will be better suited to this environment and make it through the winter this year.