Visitors to the Farm…

Denise’s parents flew out for a visit.  First time in 11 years that both of them made it out!  So, we did some sight seeing and work on the farm.
Day 1: Trip to Hell’s Gate State Park in Lewiston.  There are 2 museums at the park.  The Lewis and Clark Discovery Center (with displays, movies about Corp of Discovery and Nez Perce Tribe) and the Jack O’Connor Hunting Heritage Education Center.  My parents went to check out the museum’s while the kids swam in the Snake River.  They have a very nice sandy beach area in the park.
Day 2: We met Henry out at some of his wheat plots.  Denise’s dad, Dennis, is a wheat farmer in Kansas and he really wanted to see some wheat up close on the Palouse.  We were in luck, the cooperator/farmer that lets Henry put his test plots out was cutting on an adjacent field and he took my dad for a ride in his combine.  They could just not believe all the rolling hills of wheat.

Then, we were told that the grain was going to the Almota Elevator and it would be loaded onto barges and sent up/down the river (probably down the river…not sure).  This is not something you are going to see in Kansas.  So, we headed out to Almota.

We also drove over to Lower Granite Lock and Dam but it was about 5:00PM and they were getting ready to close for the day.  Maybe an adventure for next time…
Day 3:  A 2-part trip today.  First, we were off to hunt for star garnets at the Emerald Creek Garnet Area.  We all mined for garnets and then took them to the Gem State Crystal store in Moscow.  A couple of ours had weak 4 ray stars.  I have written about star garnets in the April 9, 2017 blog and you can revisit that by clicking HERE.

The second part of our day was hiking to the Elk Creek Falls.  We only made it to the Upper Falls but that one is the most fun because you can walk right into it.  There were some people swimming and fishing there. 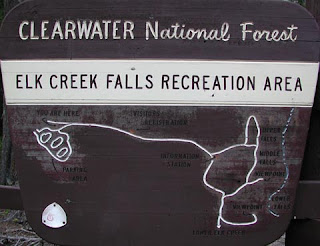 Day 4: A trip to the Moscow’s Farmer’s Market.  Joshua was selling huckleberry lemonade and he had his best day of sales ever!

We also drove up to the top of Bald Mountain.  There have been wildfires in Montana and Canada so we are having lots of smoke so the view was a little smokey.

Day 7: Started doing some firewood collection on the property.

My dad went to visit the cows next to us at the University of Idaho dairy.  This cow (#16), loved to come and get a pet from him.

Mom and dad worked on a lot of projects in between all the sightseeing.  They dragged this old tub out of one of the barns and cleaned it up and filled with water.  Then, we put some rocks there for Mark.  One of his favorite things is to throw rocks into water and now he can go out back and do that whenever he wants!

A big THANK YOU to Dennis and Terry for all their hard work while they were here!

They put a new bottom on my trailer that goes behind the Polaris (you can see the trailer in the pic of dad cutting the wood).  That was a huge project and I am so glad to have it done!  (There were holes in the previous floor).  I am excited to paint it and I will take a pic when it is all pretty.  I wish I would have taken a “before” pic.

We also started to renovate a water feature out in front of the house.  It was literally buried behind a shrub that had taken over.  I just need to get a few more rocks for it and I should have a picture of that completed project soon…