Just a brief update on our top bar hive.  As I had noted in the July 2nd blog, our brand new queen that we got on May 4th died.  I bought a new queen the end of June and when I went to put her in the hive, I noticed that there was brood!  The bees had made their own new queen!  This was exciting to me because the hive had pretty much “fixed” itself.

I let it go and was super busy with unpacking that next month.  I went back into the hive the middle of July and noticed that there was not much brood and there was a bunch of supersedure cells.  The new queen that the hive made had died!  At this point, I was like, okay, I give up on this hive this year!

Of course, I could see the bees going in and out of the hive as we are unpacking boxes and playing around in the yard.  The middle of August, I figured I should open the hive and see what is going on. A new queen and lots of brood!!!  It looks like this queen might be the winner.

The problem is that because the hive has been in such fluctuation with making new queens, the bees have not had a lot of time to store honey.  They are starting to store honey but my hive should be like this in May (lots of brood) and now it is September and they are just getting around to storing honey…

I am going to start researching how to feed bees during the winter and cross my fingers that they make it!  This is far from an ideal situation.  As I had alluded to earlier, I pretty much had given up on this hive the middle of July when I saw that they were making another queen.  I am going to do everything I can to help them through the winter but I am keeping my fingers (and toes) crossed.

One of the first things I did when we moved in was to put up a hummingbird feeder outside my kitchen window.  It was the end of June but I was hopeful that we might still be able to get some hummingbirds.  I am happy to say that we did get one female hummingbird coming around.  We also attracted some kind of flying insect that was enjoying the feeder.  The hummingbird would have to fight off the flying insects to get a drink but they seemed to work it out. 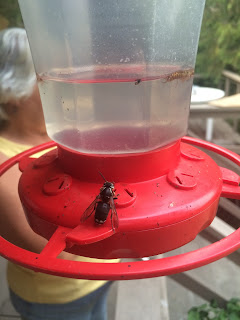 One afternoon, I was walking by a bush and noticed these “holes” in the leaves.  This bush is below the hummingbird feeder… 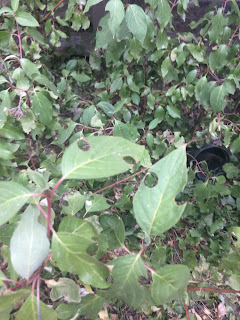 I had listened to a podcast about using bees for pollination.  The podcast had mentioned that if you see “holes” in your leaves, that it could be leafcutter bees.  I immediatly googled leafcutter bees and realized that the flying insects at the hummingbird feeder were leafcutter bees.  Leafcutter bees are really great at pollination.  I have seen a couple sources say they are 20 times better at pollinating than honeybees.
Leafcutter bees are cavity dwelling bees that lay their eggs in existing holes. They do not create holes or damage structures to make holes.  We have a HUGE abandoned wood pile behind our house so I am pretty sure that is what they are using for their home. They use the round piece of leaf to line and cover the end of their nesting hole.  You can attract Leafcutter bees to your yard by offering a “house” for them. Encourage them into your garden by providing bundles of hollow canes, or a log of wood drilled with holes around 1cm in diameter.  Here are a couple of great articles about Leafcutter bees and there is some video of the bees using the leaf disks to line their nesting holes:
Buzz About Bees