Okay, let’s get the failure out of the way first.  I did not set the brake on the Polaris and it rolled down the hill and decapitated my brand new pear tree!  I know, I know…not the biggest loss in the world but it was still upsetting to me. 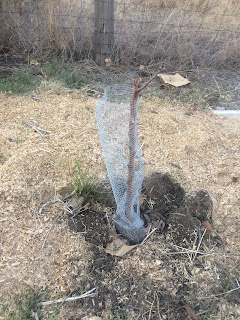 Lesson learned:  Always use the brake even when you think you are not on a “hill”.  I promptly ordered another pear tree so I could get it planted right away…then, I noticed my other pear tree “leaning”… 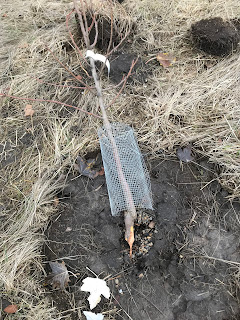 Something had totally chewed through and basically killed it.  I don’t consider this second pear tree a “failure”, just a part of life and living with lots of little critters.  It did get me wondering if maybe I am not supposed to have pear trees!  It was too late to get another one in the ground this fall but I will replace it in the spring.

On to better news…I honestly did not think I would get around to planting anything in the garden area this year but I did get the garlic in!

I bought garlic at the Farmer’s Market. It was the last Saturday in October.  I ended up with about 37 Spanish red, 37 Music, and 16 German red cloves for a total of 90 cloves to plant. 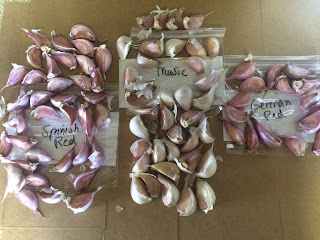 I placed it in the biggest stock tank and covered it with soil. 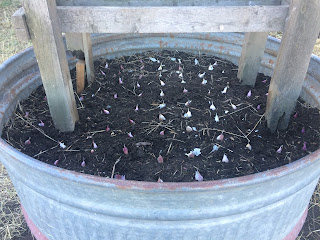 Then, I covered it with wood shavings mixed with rabbit manure.  This was a HUGE score for me…my friend (thanks Stuart) told me of a local rabbitry that places all their wood shavings out for people to take!!!  It is hard to see from this picture but there is LOTS of rabbit manure in there!  The great thing about rabbit manure is that it is not “hot” so it does not have to be composted before you use it. 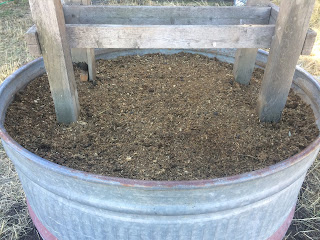 Then, I covered it with shredded hay from the barn. 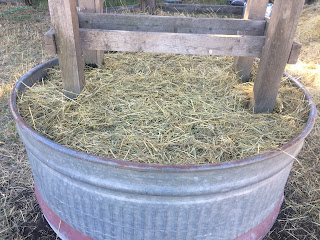 If you are wondering what the big wooden thing is in the bed, I am planning on planting my tomatoes in this tank next summer and will be tying them onto this as a trellis.  I have no idea what this thing was used for but I found it in the barn and thought it would be great to use for this purpose…
I didn’t think I was actually going to be able to collect any leaves because I was just so busy this fall but things finally quieted down the first part of November because we had a week of really cool weather.  I finished up some sheet mulching and headed out and looked for leaves out on the curb.  I identified a house with a lot of BIG bags.  I went and grabbed a couple and took them home.  Then, the next time I was in the area, I went by again but there was a guy getting out of his car there and he was taking a long time.  I finally just went up to him and asked if I could have his leaves.  He started quizzing me on what I was using them for and we started talking.  Come to find out that his name is Greg Moller and he is a professor at U of I in the School of Food Science and Environmental Science Program and he works with the Sustainability Institute. 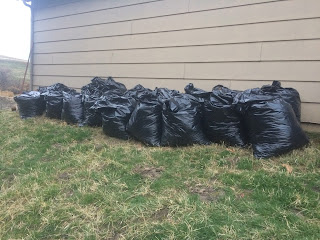 I told him all about my farm and how we were using the leaves to build up the soil.  He was very happy that the leaves were going to a good home…LOL…
Also, my friend from church brought out a load of leaves and dumped them on our property (thanks Deacon George!).  I didn’t get a pic of that…
I really thought that the cool down at the beginning of November was the end of my gardening for the year.  Then, it kind of started to warm up a little bit.  I noticed a Facebook post that I had scheduled on my own Remarkable Farms Facebook site about asparagus.  Sometimes, I will actually schedule posts to remind myself of things that I want/need to do.  It reminded me that I had wanted to put together some raised beds.  I can’t believe that I forgot that!  I had been just so busy with all the sheet mulching.  I will have a short post next time about the raised beds that Henry and I got built.  After that, I went back to sheet mulching the area that had the pear trees in it.  I had kind of given up on that area and figured that I would do it in the spring but since there was no snow, I started in on that.  Lots of mornings, I was working and it was in the 20’s but as long as you keep moving and there was no wind, it was not too bad.
This is the start of a food forest area.  I put down the cardboard, then the leaves, and hay. 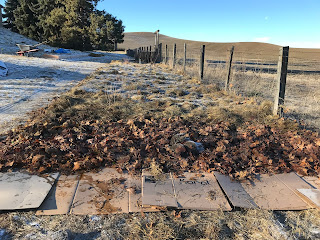 It is hard to see the little bare trees but I have the new pear, 2 cherries and several current bushes planted in here.  I will be adding herbs in the spring.

I got a lot more completed that I thought I would so that is great!  This video was taken on December 15th, I had posted it on the FB site…definitely finished with the gardening for this year now…we got 5.2 inches of snow!  I will post about the raised beds I made next time….