I knew it was going to happen…my bees swarmed!  I had seen the swarm cells.  Swarm cells are used to make a new queen.  A beehive makes swarm cells when the hive is too crowded.  The “old” queen takes off with worker bees to find a new place to build a hive.  Most of the bees will leave in the prime (or first) swarm.  Sometimes, there will be smaller afterswarms.
This is how it all went down…I was out mowing and I noticed this swarm hanging onto a branch.  It was hanging very low, only about 4-5 feet off the ground.  As I had said previously, I knew this was going to happen because I had noticed the swarm cells in the hive. 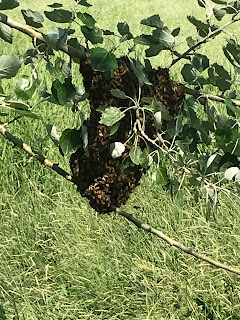 I should have split the hive but I have been so busy this spring with getting the garden ready, that I have not had time to stop and get a hive all put together.  Also, I was getting ready to go out of town and I figured if they swarmed while I was away, I wouldn’t have a chance to get them anyway.  But, as luck would have it, I did see the swarm and I actually had a little free time that afternoon.  I called my friend, Alison, with the Moscow Bee Company.

Alison brought a nuc box and was able to capture the swarm.

Then, Mark’s worker that I had brought out to see the swarm noticed another smaller swarm (afterswarm) up higher in the tree.  Alison had this fancy bucket that she used to capture that swarm…

Alison kept that swarm and I headed to Spence to get a langstroth hive for the swarm that she put into the nuc box.  I took out some of the frames and tried to “dump” out as many of the bees that I could.  Then, I just turned it upside down and left it for a little bit to allow the last of the bees to crawl down into their new home. 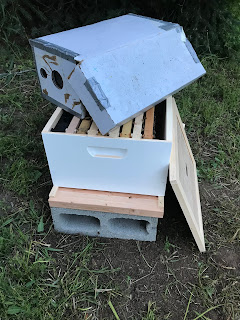 So, here it is…the new hive.  I went in to check in on it the next evening and I saw the queen in there.  I wasn’t too worried but it was nice to see her. 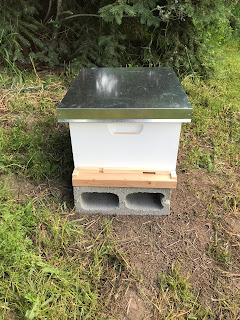 I will be keeping an eye on my top bar hive.  There are still lots of bees in there but I am also excited to try a new type of beekeeping in the langstroth hive.
~Denise