I was reading more about fermenting foods and the sourdough bread was listed.  I started to do a little bit more reading and it was said that the probiotics that help with the fermenting eat some of the gluten and that “some” people can eat breads made using sourdough because the gluten level has been decreased.  I tried spelt wheat a couple of months ago because I had heard that the gluten levels were lower in that but it still did not agree with me.  I like the idea of eating more fermented foods so I am going to try this.
These probiotic microorganisms:
1. Digest and assimilate (properly absorb) the foods you eat. Without adequate beneficial microflora in your gut, you can’t absorb nutrients in the foods you are eating.
2. Are necessary in order to maintain a healthy intestinal tract.
3. Contain uniquely balanced proteins, fatty acids, cellulose, minerals, and innumerable other nutrients our bodies need.
4. Provide vitamins B1 through B6 from lactobacillus and B12 vitamins from wild yeast. Wild yeast multiplies aerobically. This is because they have oxygen in them (not free radical oxygen ions) that feed your blood cells and not cancer cells. Most plant proteins including grains, seeds, cereals, beans, nuts, and some grasses form gluten. However, sourdough microflora has all the amino acids available, without the protein that forms gluten.
5. Depletes damaged starch in bread, thus diabetic people should not get insulin shock. It is a misconception that whole wheat is better than white flour for diabetics (the Glycemic difference is only 1%).
6. Produce acids, which will break down and remove some of the glutens from the bread. Acids do not allow mold and most bad bacterial growth. Alkaline with high pH allows mold growth and toxins. Mold ferments at a higher pH, allowing bad bacterial growth and the secretion of toxins. The absence of acids is abnormal, even animals have acid stomachs to kill bad bacteria.
7. Offset the effects of phytic acid, which robs your body of precious minerals.
According to Wikipedia:
Phytic acid is found within the hulls of nuts, seeds, and grains. In-home food preparation techniques can reduce the phytic acid in all of these foods. Simply cooking the food will reduce the phytic acid to some degree. More effective methods are soaking in an acid medium, lactic acid fermentation, and sprouting.
Phytic acid is a strong chelator of important minerals such as calcium, magnesium, iron, and zinc, and can therefore contribute to mineral deficiencies in people whose diets rely on these foods for their mineral intake, such as those in developing countries. It also acts as an acid, chelating the vitamin niacin, which is basic, causing the condition known as pellagra. In this way, it is an anti-nutrient. For people with a particularly low intake of essential minerals, especially young children and those in developing countries, this effect can be undesirable.
“Probiotic lactobacilli, and other species of the endogenous digestive microflora as well, are an important source of the enzyme phytase which catalyses the release of phosphate from phytate and hydrolyses the complexes formed by phytate and metal ions or other cations, rendering them more soluble ultimately improving and facilitating their intestinal absorption
8. Dissolve proteins by producing protein enzymes, thus loosening multiple peptide bonds so that you can absorb more amino acids into your body. They dissolve four gluten-forming proteins: albumin, globulin, prolamin, and glutalin. They also produce alcohol that dissolves the most stubborn water insoluble protein bonds. These bonds are the reason why so many people have gluten intolerance.
9. Inhibit the growth of bad bacteria by: (1) creating a more acidic environment (2) producing anti-bacterial agents, and (3) absorbing all the B vitamins from their surroundings leaving none for the harmful bacteria.
10. Have most everything needed for optimum nutritional absorption. To absorb calcium, you need magnesium. To absorb magnesium, you need vitamin E, C, etc. Most of these are in the sourdough microorganisms, thus providing optimum absorption.

I ordered a FREE sourdough starter from 1847 Oregon Trail Sourdough Starter.  Click on the picture above to check out their website.  Here goes! 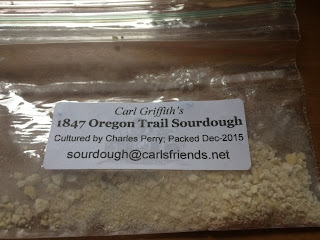 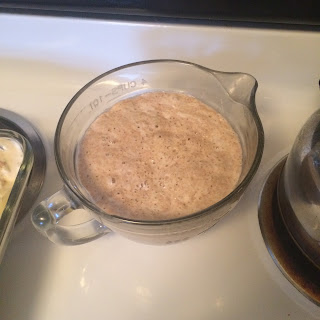